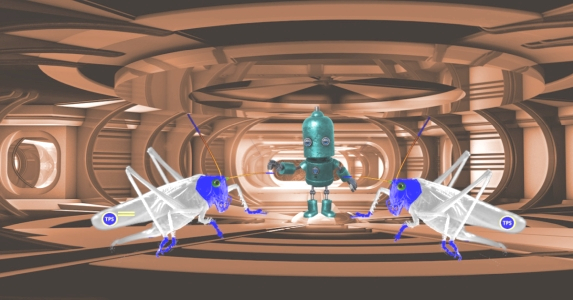 The waylaid cargo vessel, Shiny Nova, sped along the arbitrary trajectory its navigator had set in a moment of panic. Alone in his quarters, Bleenor wondered what to do about the ship’s unwanted passenger, a human female infested with a mind-controlling parasite. There was no telling how much longer Bot Two could keep her in a medically-induced coma.

Yet despite the urgency of the situation, Bleenor’s memory of his blissful embrace with Zevdra kept intruding on his thoughts.

“Idiot!” he scolded himself. If he didn’t find a solution, he’d lose her - and their last hope for survival. His voice trembled as he called out to Bot Two, through a direct comlink to Sick Bay.

The servicebot’s logical assessment had a calming effect and opened Bleenor’s mind to a fresh train of thought.

“Know anything about hypnosis?” he asked.

If the servicebot could reach the captive human’s mind there was a chance she’d know where they could hide. But Bot Two offered little encouragement. Attempting to raise the human’s consciousness while continuing to suppress the symbiote might result in permanent brain damage.

And yet, Bleenor reasoned, wasn’t this parasitical infestation a type of brain damage? Bot Two’s intervention might even free the human’s mind. But maybe there was another way.

“Bot One,” he called out, “could you transfer her consciousness into the ship’s AI?”

Sorry, not enough bandwidth,” said the servicebot. “But if you reformat my central processor, the AI might be able to copy her brain wave signature and load it into my empty head.”

“AI, is that possible?” asked Bleenor.

For the second time that morning, the answer he received was disappointing. While the AI could attempt to digitize the human’s thought processes, there was every chance the copy would be incomplete or garbled. The most recent attempts at mind-transference on Veratrese had met with only partial success, even under ideal conditions.

Trouble was, the only alternative was to create a cyber-neural link between the human and one of the other crew members - and risk a second symbiote infestation.

“There’s too much we don’t know about this species,” said Bot Two.

Just then, Zevdra walked into Bleenor’s quarters, groggy from a long nap.

When Bleenor outlined his desperate plan, Zevdra shook her head.

“Not risking any member of this crew,” she said. “The servicebots are just as sentient as we are.”

“I have an idea,” said Zevdra. “Had a dream about it, actually. In our universe, the ruins at Serlat 3 were built by a people with total control over time and space.”

“That’s just a rumor,” said Bleenor. “And anyway, the holovid you downloaded from … wherever … showed nothing but rubble on this version of Serlat 3. What do you expect to find?”

Dunno,” said Zevdra. “But it’s the only place I do know of to start looking for answers. If it’s as uninhabited as it looks, we’ll be better off than landing on a planet hostile to ‘bug people.’”

Bleenor sighed. Zevdra was even more beautiful when she was serious and determined.

“Well, we could try,” he said. “Maybe Bot One could find something in the rubble.”

Zevdra sidled up closer to him, her antennae twirling.

Bleenor’s mandibles clacked in spite of himself.

“I’ll give you that,” he said quietly. “But come on, call up that holovid again while I plot out a course that might give us some cover.”

“Aye, aye,” said Zevdra. The flicker in her multifaceted eyes made Bleenor’s heart race. A moment later, the holovid of Serlat 3 had once again taken over the command center.

“Affirmative,” said Bot One, “as the humans like to say, for some reason. Can’t figure out why organics are so in love with machine-speak.”

“I’ll tell you a secret,” said Zevdra. “We envy your logical minds.”

“Well, you shouldn’t,” said the servicebot. “Logic is a trap. No matter how hard I try, I can’t get beyond the strict boundaries of quantitative analysis.”

“But you sound so … thoughtful,” said Zevdra.

“That’s just my personality vector,” said Bot One. “It’s a state-of-the-art simulation of organic mental activity. But nothing I ever say is improvised.”

“Let’s commiserate later, OK?” asked Bleenor. “Sensors show a ship gaining on us from about a light year away.”

“Take a look at the holovid,” said Zevdra. “See anything?”

Bot One stared at the translucent scale model of the abandoned planet.

“No,” it said. “But the AI’s long-range scans report some slightly better preserved ruins in the planet’s southern hemisphere. I suggest we head there.”

Zevdra tilted her head to one side before entering his coordinates into the nav-AI. A few quick taps on the command console set the Shiny Nova’s course and engaged its space-folding engines. For a brief moment, a flicker of hope entered her soul.

That is, until Bot Two’s voice crackled over the ship’s intercom.

“The patient is coming around,” it said. “I suggest we erect a containment field around Sick Bay as soon as….”

The servicebot’s voice broke off and was replaced by the sound of a violent struggle.

“That human is half Bot Two’s size,” said Zevdra. “What could possibly....”

“AI, seal the lower deck!” Bleenor shouted. “Let nothing in our out.”

The Shiny Nova’sAI complied and again, Zevdra had reason to believe they were safe. But the galley was on the lower level, along with their bunks and the sanitary facilities.

“This is terrible,” she said. “How long can we survive without food or water?

“Not long, I imagine,” said a voice over the intercom. “I, on the other hand, will be just fine. Your AI is quite sophisticated. Plenty of room in here for me. Just as well. The human was too limited.”

“Your ship?” said the voice. “You must be joking. But you’re in luck. I’ve always wanted to see the ruins of Serlat 3 for myself.”