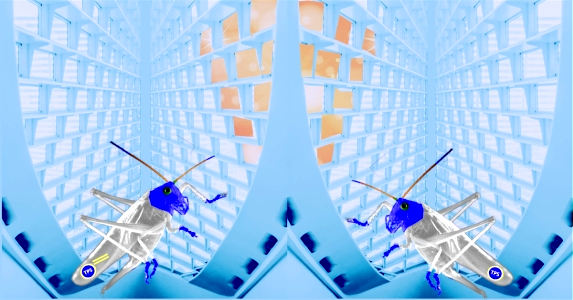 Bleenor scrambled to say something, before the telepathic symbiote detected his thoughts about the orange globe.

“Probably a malfunctioning status light,” he said. “You know, the only thing still operational on a broken down device.”

“Yet it fascinates you, doesn’t it?” asked the symbiote. “Just like an inferior being to focus on trivia. I’m searching for usable weaponry, so I’ll be off. Feel free to stare useless trash in the meantime.”

With that, the alien mind made Bot One stalk off toward one of the ancient city’s many crumbling towers. Bleenor waited until it disappeared behind a large building, before leaning over to Zevdra.

“Do you hear anything?” he whispered.

“The sphere,” said Bleenor. “It’s talking to me in Daloorez Code.”

Bleenor clasped his helmet between all four hands.

“Who does?” asked Zevdra. “Didn’t they all abandon the planet?”

“What is it?” asked Zevdra.

Bleenor explained that the intelligence behind the pulsating light had sent him a vivid image of a building about a hundred meters south - a little too much data all at once.

“Or just another trick.” said Zevdra.

“Have to chance it,” said Bleenor, “while you-know-who feels overconfident.”

Hearts pounding, the two insectoids walked as nonchalantly as their terrified minds would let them toward the building that Bleenor now saw vividly in his mind. It was one of the few better preserved structures and, once inside, looked brand new.

Zevdra balanced briefly on her rear legs to take in the entryway’s high, vaulted ceilings. What was this place?

Fear not. said a voice in his mind. We have planted false thoughts in the symbiote’s imagination. It believes it is speaking to you right now.

“Can you connect to my … my Captain’s mind, too?” asked Bleenor. “And can you help us?”

Unknown, said the voice. We too have been oppressed by the symbiotes. That is why we have remodeled most of our buildings to resemble ruins - the better to hide. There is, however, one possibility.

As the voice explained, because Bleenor and Zevdra had already come in contact with the Alornoz, they had less to lose than the hidden residents of Serlat 3.

The two insectoids listened as the voice described the intricate pattern of repetitive thoughts they’d need to maintain - perhaps for hours - to disable the symbiote.

“Sounds like torture,” said Bleenor. “You OK with that, Zev?”

“I … I want to say no,” said Zevdra. “We have strict rules about that back home. But we’re fighting for our lives and, well, we’re not home anymore.”

Go now, said the voice. We we cannot deceive the symbiote much longer. Simply return to your previous location. The symbiote will not realize you were gone.

Remember, said the voice, allow no stray thoughts to enter your mind.

As they hurried back to where they started, Bleenor worried that Zevdra’s presence might be distracting.

“I was just about to say the same thing,” she said.

Soon they stood in front of Bot One, who was likely never to be itself again. Before their adversary had a moment to speak, they began reciting the Serlatian patterns they’d just learned. At first, it seemed to have no effect, until….

Undeterred, Zevdra and Bleenor repeated the patterns, not pausing for a nano-second.

“Stop!” the symbiote shrieked through Bot One. “Stop! Make it stop!”

The frenzied Alornoz ran Bot One around in circles to shake off its agony. Though success seemed within reach, neither of the two insectoids dared allow themselves to gloat. And just as their minds began to flag, the voice from the building they visited - in fact a chorus of voices - chimed in to reinforce the patterns until at last, they saw Bot One crash to the ground and go dead.

You may stop now, said the Serlatian voices. This one will trouble you no more.

“That’s … that’s great,” she said. “But aren’t there thousands of these things?”

Millions, said the voice. In light of that, we have a proposal for you. Carry it out successfully and we may be able to send you back through a vortex similar to the one that brought you here.

“You mean we have to do you a favor before you’ll help us?” asked Bleenor. “That’s not fair!”