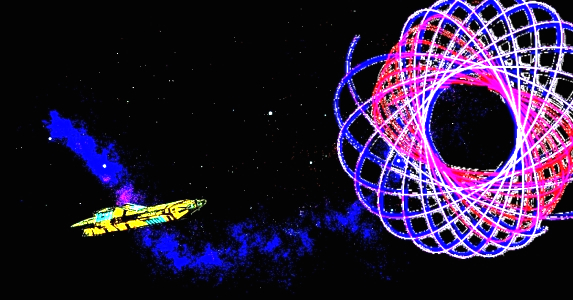 “It is not as you imagine,” said the Serlatian in Bleenor’s mind. “We cannot carry out our offensive without revealing our position and risking millions of lives. You two, however, are already known to the Alornoz and have less to lose.”

“They have a point,” said Zevdra. “The least we can do is listen — unless you know another way home.”

The outline of the Serlatian plan was simple. The Shiny Nova would deliver a series of transmitters to designated asteroids across the galaxy. When activated, the transmitters would broadcast the same thought-patterns that the two insectoids had used to incapacitate the symbiote that had infested Bot One.

“Once the transmitters are in place, the cumulative effect will drive the Alornoz out of this galaxy forever,” said the Serlatian.

“Not good enough,” said Zevdra. “I can’t agree to a plan that just turns these slugs into somebody else’s problem.”

But as the Serlatian assured her, they had long ago sent detailed plans for the transmitter system to the far reaches of the settled universe.

“By the time those parasites arrive, everyone will be protected,” said the Serlatian.

“Do you buy that, Zev?” asked Bleenor.

“I guess I have to,” said Zevdra. “Unless you’re ready to die here with a slug in your neck.”

Without another word, Zevdra and Bleenor raced back to their lander and shot up to their ship, which was still in orbit around Serlat 3.

“We have transmatted the transmitters to your vessel and entered the necessary flight plan into your navigation system. Your AI is now also capable of transmitting the deadly pattern, should you encounter any symbiote-controlled ships. The moment the last transmitter is in place, a vortex will appear a short distance away and remain open until you are through. Good luck.”

And so, over the course of the next two weeks, they pushed the Shiny Nova at top speed to deliver the self-deploying transmitters throughout the galaxy. Along the way, their onboard transmitter helped them evade capture, despite several close calls. At last, the work was complete. A blaze of light appeared in the near distance.

“The vortex!” shouted Zevdra. If it hadn’t been for their grueling ordeal, they might have noticed how beautiful its bright, purplish edges were against the inky black of deep space. As it was, they thought only of exiting that treacherous universe unscathed. The moment the vortex closed behind them, Bleenor called out to the ship’s AI.

“On course for mission trajectory,” it said.

“That’s right,” he said. “Too bad we’re too late with these medical supplies.”

“Correction,” said the AI. “Our mission is on schedule.”

“How can that be?” asked Zevdra.

“The Vortex point of entry was consistent with these spatiotemporal coordinates,” said the AI.

“I miss Bot One,” said Zevdra. “It was so good at explaining things.”

“You called?” said a voice in the next bulkhead.

The two Veratrese gasped as their lost servicebot walked into the command center. Apparently, the Serlatians had thought of everything.

“Turns out I’m just a toy to them,” said Bot One. “I was fully functional less than two rotations after you left that version of Serlat 3. And it may interest you to know that a spatiotemporal vortex can be aimed at any coordinate set you choose.”

“I’ll keep that in mind the next time I’m … vortexing,” said Bleenor.

The unexpected official announcement that boomed through the ship’s intercom doused his joyful mood.

“Attention, all Trans Proxima Shipping personnel,” it said. “This is Relnatror Delatrin with your quarterly reminder that crew member fraternization is strictly prohibited and grounds for immediate termination. As always, thanks for being a valued member of our fleet.”

“Positrons in a pile, what’ll we do?” she asked. “Piloting is all I know.”

Bleenor’s mandibles clacked as he plopped down into his navigator’s chair.

“I wonder if there’s a parallel universe out there where there aren’t so many stupid rules,” he said.

Bot Two, who had just clomped up the titanium spiral stairs that led from the lower level walked over to Bot One.

“You want me to tell them?” it asked its machine-mate.

“I’ll do it,” said Bot One. “Though I’m not sure it’s a good idea. But here it is: Captain, you should know that the Serlatians have retrofitted this ship for vortex creation — software, hardware, schematics, the works.”

“So, theoretically, we could open a vortex anytime we wanted?” asked Bleenor.

“Nothing theoretical about it,” said Bot One. Zevdra and Bleenor gasped as a brilliant ring of bright purple appeared on their view screens for the second time that day.

“Voila, Vortex!” said Bot One. “Now, there’s no way to know if the metaverse on the other side includes a society with the attributes of personal freedom I assume you want. But there are an infinite number of possible metaverses to explore.”

Zevdra pulled Bleenor close. As they gazed up at the image of the vortex, they were overwhelmed by the thought of starting over. Far away, that is, from the petty restrictions of a world more in love with rules than with Love itself.