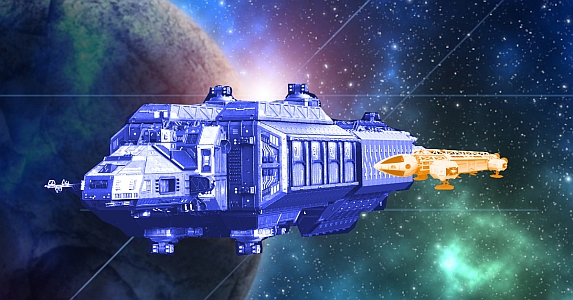 On the Terran scout ship Arcadia, the phrase “engine troubleö had taken on a whole new meaning. It was enough to make Captain Graffiti feel like he had a mutiny on his hands. His voice boomed out of the ship wide com like a clap of thunder.

“Ensign Banks,” he said, “are you trying for a court martial? Why the French fried neutrino pie are you veering off course?”

“It’s not me, Captain,” said a young female voice, “we’re being pulled into orbit.”

“With what?” asked Graffiti, “ropes?”

“I’m locked out of the nav-AI, Captain,” said Banks, “Looks like we’ve been hijacked.”

Graffiti leapt out of his command chair.

“Lieutenant Sacher!” he yelled. “What’s the point of having a Cyber Security Officer?”

Sacher’s slurred voice rang out over the com system a few seconds later.

“Seems I am,” said the Lieutenant. “Feels pretty ģ pretty good. Do you think I’m pretty?”

Graffiti counted to ten and ordered a team of physiobots down to his station on Level 3. Their report was discouraging.

“The Lieutenant’s workstation and surroundings show traces of Cosetalyn,” said the lead physiobot. “It appears to have entered through the ventilation system.”

The Captain ordered Sacher to Sick Bay and had the entire level sealed. Fortunately, no other crew was present at the time.

“So where are we netting out, Banks?” he called out. “We gonna crash?”

“Negative, Captain,” said the ship’s navigator. “Whatever captured us is entering the Arcadia into orbit around that planet.”

A placid machine voice echoed through the bridge.

“No need for theatrics,” it said. “I exist to serve. The planet is listed as ‘Stygia Prime,”

“I fear your instruments have been compromised, Ensign,” said the ship’s AI. “As previously noted, we are now in orbit around said planet.”

Graffiti opened his mouth to speak but was distracted by a searing burst of static. A barely audible voice emerged from the background noise

The captain took a step back. The last time he’d heard that voice was fifteen years ago when they were both sent out to deal with a reactor melt-down in the Halcyon Sector.

“Paul,” he called out, “What in the Horsehead Nebula are you doing way out here?”

Though his only answer was another burst of static, he knew he had to investigate, not least because, whatever was actually going on, he’d been dragged right into the center of it. And his involvement was getting more real every minute. Ensign Bell, his Communications officer raised his tenor voice from the back of the bridge.

“Captain,” he said, “We’re being hailed by an approaching lander. It requests permission to dock.”

“Who the Hell is it?” asked Graffiti.

“Permission denied,” said Graffiti. “I have no reason to believeģ.”

“I fear the matter has already been settled,” said the ship’s AI. “An unmarked lander is now attached to the hull at Docking Port 2.”

“Ensign Bell,” said the Captain. “open a channel to that lander.”

The grating, metallic machine voice was unlike anything Graffiti had heard outside of a museum setting back home on Europa Base.

YOU WILL BOARD. OR YOU WILL BE BOARDED

Graffiti spoke into the ship-wide comlink.

“All hands, this is the Captain,” he said. “Intruder alert! Battle stations!”

But it was no use. Within seconds of issuing his command, the Arcadia was swarming with tiny, insect-like androids. Soon after, they’d found the exposed neck of every crewmember onboard and issued a sharp, stunning sting that sent them slumping to the floor. Everyone, that is, except the Captain.

The Captain took a deep breath, grabbed the handle of his regulation lase pistol and pointed it at his right temple.

“It doesn’t work like that,” he said. “You want me so bad, you have to release my crew. Otherwise — how shall I put this? — click?”

After a moment’s delay, the tiny androids swarmed again and the crew of the Arcadia began to revive.

“Now,” said Graffiti. “Why don’t you nice folks explain what the total eclipse of my ass you want?”