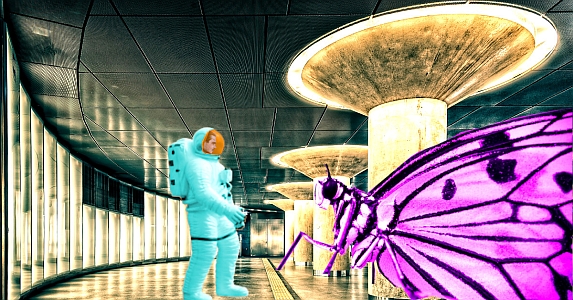 Captain Carlo Graffiti stared at what was left of his former crew mate.

“You want to explain that, Lieutenant?” he asked. “I didn’t agree to any procedures. You said you needed my help.”

“Really?” he said. “You’re gonna go all military again? I just figured you could see the advantages of remodeling for yourself. But OK, let me take you around and by the time we’re done you’ll be itching for a change.”

The human/android hybrid dismounted the bright-yellow scooter and led the way into the sprawling city ahead of them. Graffiti clambered out of the scooter’s sidecar and followed, but not without keeping an eye out for an ambush. In one sense, his caution was common sense. But considering he had no means of defense and nowhere to hide, it hardly mattered. Meanwhile, Paul had been chatting manically a out the splendors of the city they were touring.

“And over there in the distance, Old Buddy,” he said, “is one of the geothermal stations that generates power for this entire region. Amazing, no?”

Graffiti gazed into the distance where his eerie companion was pointing and shook his head. The word that came to his mind was “desolate.”

“Lieutenant,” he asked, “where are all the people?”

“You arrived at an awkward time, Carlo,” he said. “This is our sleep period. Nobody will be out and about for hours.”

“Sounds more like a hive than a city,” said Graffiti.

His head whipped to the left at the sound of a loud thud. He saw a winged insectoid about three meters tall who looked as if it had just alit. Its deep, rumbling voice seemed to rattle the hinges of his helmet visor.

“What an astute observation,” it said. “I am Halzerlak, the regional governor for this Begnati territory. You have been invited to share a unique experience that I would think anyone would welcome.”

“Why would you think that?” asked Graffiti. “And I don’t consider an ultimatum issued at gun point an ‘invitation.’ You were ready to take out my entire crew unless I boarded that lander.”

“So you see,” said Halzerlak, “You know what it means to put the needs of the community above your own. In essence, you are already one of us. “

The captain of a Terran Fleet ship he knew he might never see again, counted to ten. Losing his temper, he knew, would get him less than nowhere. But what was it about tyrants, he wondered, that made them think they could sell serfdom as a benefit?

Probably because enough people fall for it, he thought.

“Here’s the difference, Halzerlak,” he said. “I chose to make that sacrifice. I didn’t have a giant bug slice my head off and shove it onto an android doll. Tell me something. Do you operate Paul here with a remote control unity or is a shock collar enough?”

“Never mind, Unit 1848,” said the insectoid. “Your mission is complete for this period. Return to quarters and enter sleep mode.”

Graffiti watched as the look of deep dejection that flashed across Paul’s face vanished almost immediately to be replaced with a blank stare. Before long, he heard the motor of Paul’s scooter rev up behind him then fade into the near distance.

“It has been some time,” said Halzerlak, “since I have witnessed such a raw display of toxic individuality. Yet it simply confirms my beliefs all the more.”

“Did you just say ‘my beliefs’?” asked Graffiti. “Don’t you mean ‘our beliefs?’ what kind of community member are you? I’ll tell you. The only community you belong to is the community of bullies, tyrants and despots. God, what I wouldn’t give for a can of insect repellant right now.”

“Oh how you debase yourself with such vile anger,” he said. “Soon you will know the blissful peace of the remodeled. I envy you in a way, for your life is about to begin anew.”

Before the hapless captain could draw another breath, the ground opened up beneath him and he tumbled down into a dark, apparently bottomless shaft. All around him, the sound of incessant humming filled his ears. Was it the combined snores of thousands of captives stuck in “sleep mode,” or was he falling toward a massive machine to his certain doom?

A second later, his questions ceased as he lost consciousness on a final thought.

Got to make sure my crew gets out of orbit in time.