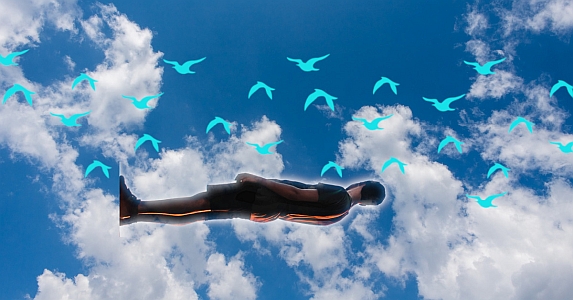 After being knocked unconscious at the end of a prolonged fall down a dark shaft, Captain Graffiti awoke flat on his back. His aching muscles strained to pull him up to his elbows. Shooting pains in his left shin suggested a broken leg. Whether he had feeling in his left arm was open to question.

His first thought was to cry out for help, until his spinning head reminded him where he was and how he’d ended up in this crumpled condition.

No one’s likely to care, he thought. Either they’ve left me here to die, or some … thing … will be here soon.

It only made sense. If the insectoid Halzerlak had wanted him dead, he’d already had multiple opportunities to make his wish come true. No, this, Graffiti decided, was simply a Class-A intimidation tactic.

Can’t let them get to me, he thought. No matter what.

He didn’t wait long for “what” to show up at his side. It was a team of insectoids and androids proceeded by an automated platform. The two androids attached devices to his torso and thighs that he realized in retrospect must have been gravity modulators.

A moment later he floated up above the floor of the gravelly pit he’d fallen into. Two insectoids nudged him gently until he hovered over the platform, then nodded at the androids. One of them activated a remote control and the battered human floated down to rest on its soft surface. Graffiti was relieved to discover that the platform was welcoming and warm. The pain in his left shin began to ease.

One of the insectoids spoke to him in an eerily seductive female voice. Graffiti’s captors, it seemed,were ready to push every available button to gain first his compliance and then his submission.

“Took a fall, did we?” she asked. “Really should be more respectful of authority, don’t you think?”

Though his mind filled with comebacks, ranging from stern to snippy, he held his tongue. He decided not to let the Begnati use his own anger to destroy his spirit.

“Oh, the strong, silent type,” said the insectoid. “I like that. Don’t you worry, Baby. My team and I are going to fix you up better than new. You’ll ditch that disgusting water bag you’ve been living in and discover the splendor of polished titanium and bright quantum gate ware.”

The former captain of the Arcadia squeezed his eyes shut tight. They were going to give him the same treatment that they’d given Paul Sprague. Before he knew it, he’d be another Unit in the Begnati “community.” What, he wondered, was it all for.

“Why me?” he asked. “You have your pick of galaxies full of sentients.”

The second insectoid spoke up in a rich tenor voice.

“That’s why this is such a great honor,” he said. “If you would only see that.”

Graffiti wanted to point out that being hog-tied to a gurney and sent off for a total “physioectomy” wasn’t his idea of being honored. But he knew he’d get nowhere sparring with a pair of mind-controlled operatives. He decided there was more value in pumping them for information about his immediate future.

“So what kind of tin soldier you gonna make me into?” he asked.

“What do you mean?” asked Graffiti.

“Any negative thought you harbor in your mind will distort its symmetry,” said the male. “Your connection to the community will be imperiled. Now please. Relax.”

In the midst of a hopeless situation, the captain decided he had nothing to lose by playing the slimmest of odds.

Soon after, his deliberately obsessive thoughts were overtaken by the sensation of floating gently through a span of wispy clouds in a narrow canoe made of pure air. There was something that he wanted to remember. But for now it seemed distant, unimportant. If he had a purpose in life, it was only to float.

And yet … what was nagging him, at the edge of his consciousness?

A flock of geese with a curious honk, flew past just out of range.

“Crew, crew, crew,” they seemed to say. What, Graffiti wondered, could that possibly mean?