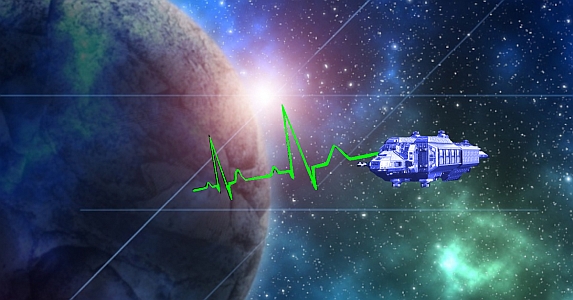 Through rapidly blinking eyes, Unit 1849, formerly known as Captain Carlo Graffiti, gradually took in his surroundings. He was lying on a high-tech hospital bed in a darkened room. Searing pain kept him from turning his head to get a better look. All he’d seen were the tubes coming out of his still-human neck. A monitor to his right beeped and a burst of pain medication surged into him.

They’re taking good care of me, he thought, aside from chopping my head off. I wonder how my crew is doing?

Despite the Begnati’s powerful stasis device, he’d retained enough independence to think on his own. The next trick would be concealing that fact from his captors. As if on cue, the male and female insectoids who’d started him on this bizarre path entered his room. They seemed as ecstatic about his condition as e was distressed by it.

“Welcome back, Unit 1849,” said the female. “Now that you’re one of us, it’s time for introductions. I am Sestriadolin and this is Palduractaron.”

“Hm,” said Graffiti. “You don’t have numbers for names, like me.”

“Why of course not,” he said. “We want our elite fighting force to operate within the constraints of strict mathematical logic.”

“Excuse me,” said Graffiti. “But I’ve been in combat many times. Mathematical precision goes out the window once the first shot is fired. After that, you have to go with your gut.”

“Intriguing,” said Sestriadolin. “These are residual thought-patterns from your original state. After your first official briefing, you’ll grasp the wisdom of Halzerlak’s master plan.”

The sooner I know what’s going on, he thought, the sooner I can find an escape route for my crew — if they’re still out there.

“I love your enthusiasm!” said Sestriadolin. “Let’s get you on your feet.”

With painstaking care, the two insectoids detached the former human from all medical monitors and closed the remaining latches that would keep his head poised on his shiny new body. Soon after, his bed began to tilt up and forward.

“You will find mind-body coordination challenging at first,” said Palduractaron. “Once you are fully upright, grab the ropes descending now from the ceiling on either side of you.”

The unlucky captain did as he was told — and felt himself about to fall, until the ropes rested firmly in his robotic hands. The motion of his arms and hands entered his consciousness with a eerie, split-second delay.

“Not to worry, my sweet baby,” said Sestriadolin. “Your brain will adjust as the AI embedded in your body adapts to your brainwave patterns. It won’t take long. Then I will personally show you how to activate your pleasure centers. You’ll see that we’ve spared no effort to ensure our enhancements don’t damage your psychological well-being.”

Graffiti bit his lower lip to keep from laughing. As if forcing him into an android body could have anything to do with his psychological well-being. Regardless, what followed was a series of diagnostic tests.

The two insectoids made Graffiti test each of his joints, with leg lifts, arm and wrist bends as well as finger flexes. The next test filled the former captain with dread.

“Turn your head to the left and right,” said Sestriadolin. Graffiti complied and was glad to see that he could move his neck without pain. Yet the question remained: Could he walk? After a few steps that wouldn’t have seemed out of place for a toddler, he began to walk with confidence.

Graffiti stared at him.

“Hmph,” he said. “You told me I’d be enhanced. This is all ordinary stuff.”

“So eager!” she said. “I love that. In fact, you received many enhancements, including long-range sensors. Go ahead, reach out to the other planets in this system.”

Graffiti shrugged and closed his eyes. Could he form an image of the other … There! He sensed the presence of the Arcadia in orbit around Stygia 3.

Told those fools to leave, he thought. What if I could send them a signal? Graffiti to Arcadia come in please.

“Captain?” echoed a voice in his mind.

Just then Palduractaron’s voice cut in.

“Well, Unit 1849, that’s enough for now,” he said. “We don’t want to risk burning out your sensors, before they’re fully vetted. Come along, it’s time you met the rest of the team.”

Graffiti sighed and followed the two insectoids. Yet despondent as he was, his heart leapt with hope. Maybe he could still save his crew from sharing his fate.