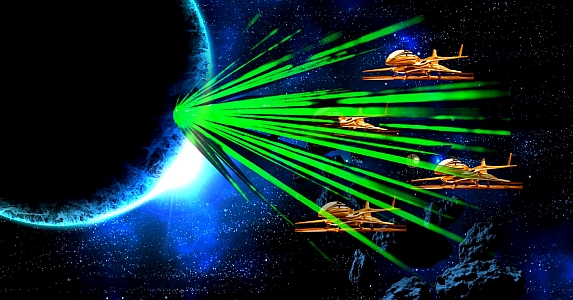 Only a day after his indoctrination into the Begnati military, Graffiti was surprised to learn that he’d been promoted to the Executive Military Council, based on his extensive combat experience.

This should be interesting, he thought, in a sickening kind of way

Shortly after rising from his mandatory sleep period, he was led into a large, hexagonal hall decked out with the Begnati World flag, the shiny bronze shield of the Begnati Unified Armed Forces and the menacing raised platform from which Halzerlak and the rest of the Begnati elite stared down at their top soldiers.

“Welcome,” said the insectoids’ fearless leader. “This will be the final planning session before we launch our historic assault on the lesser species that infest our sacred Cosmos. Today, we especially welcome the newest member of our council, Unit 1849. Let us begin.”

For the next two hours, Graffiti heard Halzerlak and the others take turns explaining their grand strategy. Soon, the former Terran captain discovered that his new android body enabled him to track, record and organize massive amounts of data in a way he could never have done before. At the end, as if on cue, the assembled council members rose as one to cheer. Yet once the outburst died down, it appeared the meeting was far from over.

“We now enter the discussion phase,” said Halzerlak. “We open the floor to any one of you to offer comments and responsible critiques of our master plan. Keep in mind, however, that it has already been subjected to deep scrutiny.”

Now’s my chance, he thought. To a chorus of whispers and gasps, he rose to his feet.

“Leader Halzerlak,” he said. “if I may. I have a comment to share. In a word, you are flirting with disaster.”

The stunned silence of the elites was paired with audible murmuring from the rest of the soldiers.

“For starters,” said Graffiti, “you must understand how the Terran Fleet, for example operates. Your plan depends on a massive confrontation between our forces and those of the enemy. That’s the last thing the humans will allow. They’ll engage you in small teams, nibble at your edges and come at you at irregular intervals when you least expect it – before leaping away into the nearest space-fold.

“Intriguing,” said Halzerlak. “How do you propose we modify our assault plan?”

That was the question Graffiti had been waiting for. He suggested that the Begnati launch a series of simultaneous sneak attacks with smaller, more agile squadrons of assault ships that could zoom in, wreak havoc and zoom away again.

“Cloak each strike force with light cancelling shields,” he said, “to make it invisible and only lower the shields at the last minute to enable weapons fire. The enemy will never know what hit it. As I know from experience, Terran sensors have a blind spot for light cancelling tech operating in the following frequency ranges.”

He went on to detail the precise specifications for the shields. His superiors were impressed and agreed to take his suggestion into consideration. With that, the meeting was adjourned. As Graffiti expected, none of the other “modified” soldiers had enough independence to offer suggestions of their own.

So it was that, a few days later, the Begnati announced a change in the Master Plan. The new plan followed Graffiti’s suggestions to the letter and it was all he could do to keep from jumping for joy. From there, the road ahead was clear — for he’d sealed the Begnatis’ doom. While the light canceling shield settings he’d given them would conceal their ships visually, they would also broadcast a signal that would immediately identify their positions to the Terran fleet.

As soon as the Begnati ships approached, Terran missiles would track their location and fire — long before they had a chance to uncloak. All Graffiti had to do was transmit the frequency of that signal to his comrades along with the Begnati’s revised attack plan, which he promptly did.

As a result, in only a few days, the Begnati fleet was destroyed. Of course, in one sense, his subterfuge worked too well. In order not to give his plan away, he had to allow his own ship to be destroyed along with the others.

Wasn’t ooking forward to living in this tin can anyway. he told himself as a Terran missile approached.

In a single blast, Graffiti’s strange ordeal was over. By losing his life, he’d escaped a living nightmare. His memory lives on in the annals of Terran Fleet history as the man who finally got the bugs out of the system.