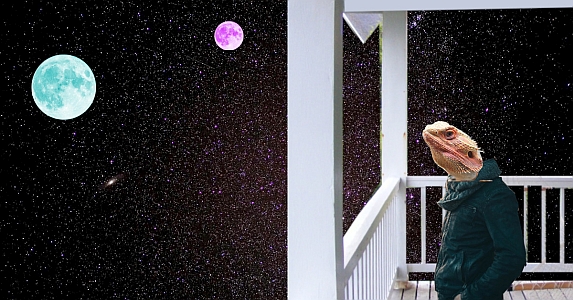 Jeklior Harkani walked out on his obsidian-tiled back porch just as the twin moons of Caliax-Dronani rose in the twilight sky. Out of habit, his blue, scaly right hand shot up absent-mindedly to shield his deep-set red eyes.

It was pointless, he knew, but he couldn’t stop himself, even though the odds of Glenna returning were lower than low. It was just that she’d promised.

But as she had explained, the decision was in the hands of the National Science Review Board, an obscure body of humans with tight fists and narrow minds.

It wasn’t supposed to have happened. As a member of the Caliax-Dronani diplomatic corps, his only job was to escort her around and smooth the way, by introducing her to the planet’s top scientists. But as they travelled together, they talked, shared funny anecdotes from their childhoods, aired political grievances — and fell in love.

Glenna DuBois had arrived with much fanfare, a member of the first human interstellar voyage. From the beginning the exotic look of the planet’s first humanoid visitors caused a stir in the hearts of this deeply traditional culture. Even among the humans, Glenna’s red hair and sky blue eyes made her stand out.

Initially, the expedition was a smashing success. Glenna and her team even began a joint project with their hosts, an attempt to combine the two species’ independent research into alternative modes of space travel. A novel engine design was proposed, with the egoal of sending lightships to their destination instantaneously, regardless of distance.

Despite language and cultural barriers, progress was made and a series of gleaming prototypes were sketched out. Then Glenna was abruptly recalled, and the project was cancelled.

But not before one dreamy night after a shared meal when, against biological odds, the two divergent souls found unexpected bliss. Was it really the traxoli wine, or a deeper connection that made it happen? Either way, Jeklior had experienced a rare incidence of yahl-keddran, a sudden awakening of his species latent shape-shifting ability. For a few precious hours, he’d become human, at least outwardly. But that had been enough, just enough to….

Jeklior winced. Now she was gone for good. Maybe it was for the best, he tried to assure himself. The yahl-kedrann was a taboo subject, even in its more common form, when a lover morphed into the ideal image buried deep in his partner’s subconscious. But an interspecies incidence? If word got out, he might likely be jailed.

And yet Jeklior’s yearning never ceased. Even ten years later, the pain was often overwhelming. He’d taken early retirement and shut himself in, venturing out only for the few essential supplies that could not be delivered.

His large head heavy with despair, Jeklior went back inside his capacious home, in time to catch the dying rings of his comlink. And what was this, the interstellar embassy?