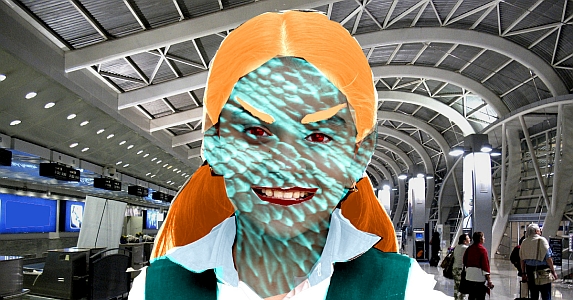 During the two years that Jeklior had known Glenna, it never occurred to him that he might visit her homeworld. As the arrival lander came to a halt in the Adam Smith spaceport in the capital city of Prosperity, he was obsessed with one sad thought. This was all that was left of the connection he’d made with the love of his life. His only slim consolation was the thought that Prosperity was likely to be more in line with interstellar standards than Earth, the human origin world.

He’d seen images of Earth, that Glenna had shown him. The astonishing antiquity of the place was enhanced, he was sure, by its alien-ness. Of course, his own species also had an origin world, Jeklior hadn’t thought of it since he was a school child. Buried in a much deeper past than Earth, Kelxian was a topic of conversation only among a solitary group of scholars. By contrast, the humans still spoke of Earth with a reverent awe he found inexplicable. And yet, he couldn’t deny that, seen through Glenna’s eyes, some of its mystery had rubbed off on him.

By now, the flight attendents were hustling all passengers off the lander. Jeklior was forced back into the here and now and forced to acknowledge that his daydreaming was an avoidance strategy. He was soon to come face-to-face with Glenna’s daughter. He’d been advised about her “unusual appearance,” and shuddered to contemplate the likely cause of it. Now as he trudged on cramped legs down the lander’s narrow aisle to the exit ramp, his three-chambered heart thumped out a wild, erratic beat.

At first, he thought he’d been spared the ordeal. But there, to his left, at the end of the ramp, a melodious voice called out to him.

“Ambassador Harkani,” it said. “Over here.”

Jeklior’s head pivoted and his eyes settled on an eight-year-old human girl, accompanied by a late-model gynoid. The gynoid’s appearance was as he expected, though it was clear that a few upgrades had been introduced to make her more graceful. The girl was another story. If he’d wanted to imagine a hybrid of human and Caliax-Dronani features, he could easily have come up with a less jarring appearance. But genetics had not been kind. The merging of incompatible traits appeared either random or deliberately provocative — as if intended to mock him for his folly.

And yet, through her mottled, irregularly scaly skin. asymmetrical, protruding brow, and slightly stooped posture, Jeklior could still see the inquisitive mind of a bright child staring out at him. The girl spoke up unselfconsciously.

“I’m Shawna,” she said. “This is OPR-24. I call her Oper She looks after me most of the time, ‘cause my uncle Jack is so busy. Oper says you knew my Mom — and she’s never wrong.”

“Call me Jeklior,” said the startled reptilian. “Oper is correct. I helped your mother get acquainted with the scientists on my world.”

A lump formed in Jeklior’s throat. He was about to cough out a reply when the gynoid chimed in.

“You can chat more with the Ambassador later,” she said. “The others are waiting.”

“The others are boring,” said Shawna.

“I have to do boring things, too, sometimes,” said Jeklior. “Come along and keep your eyes open. We can draw funny pictures of the others later.”

The mutated human gave him a lopsided smile and took his hand. Jeklior decided against telling her that her mother had once said the same thing on their way to a press conference. Instead, he followed the gynoid’s lead and walked a few meters further to the left, up a slow-moving escalator and out to a plaza just beyond the entrance to the spaceport, where a pair of black hovercars waited. Shawna and Oper climbed into one, but Jeklior was shepherded into the other, which already contained two grim-looking male humans in dark blue vatleather suits.

“Ambassador,” said the taller of the two. “I’m Agent Rankel and this is Agent Stern. How was your flight?”

Jeklior shrugged. He wasn’t about to get sucked into a long conversation with security operatives.

Though his only extended contact with humans had been with Glenna and a few of her colleagues, Jeklior knew enough about human body language to realize that both agents were bursting with curiosity. Fearing the worst, he turned his head toward the hovercar’s side window and stared out as if it offered him the most fascinating view in the universe.

“So tell me,” Rankel’s voice rang out behind him. “What did you think of little Shawna?”