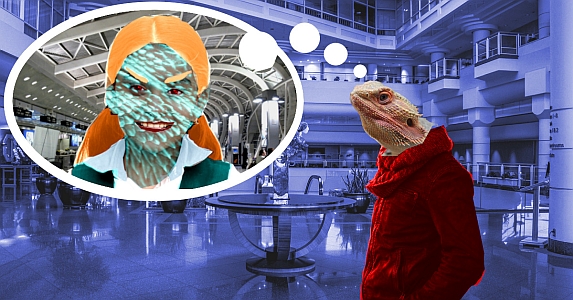 Though the human security agents in Jeklior’s hover car continued to needle him, the experienced diplomat knew they were unlikely to push him too far. As a citizen of a sovereign world that the humans looked to for space-faring know-how, he could return home at any time. There wasn’t anything they could do to stop him, short of starting a major interstellar incident.

Besides, he realized, Agents Rankel and Stern were merely “fishing.” They knew nothing about what had actually transpired between him and Glenna DuBois. For while the very existence of Shawna was highly suggestive, they had no facts to base their snickering suppositions on.

Besides, Jeklior also had no proof that the circumstantial evidence necessarily proved that he was the mutant girl’s father. Had Glenna also become romantically entangled with a Caliax-Dronani scientist? Or had exposure to the planet’s biosphere initiated a cascade of genetic mutations such that, any of her future offspring with a human partner would also be a mixed-species child?

Don’t be ridiculous, Jeklior scolded himself.

Even allowing for his lack of expertise in exobiology, he knew that nothing could be gained from panicky, data-less speculation. Besides, it wasn’t as if he’d committed a crime. Shawna had come as a complete surprise. Yet, as Jeklior knew from countless negotiations for his homeworld, sentient societies were not governed by logic. He might be scorned by the humans, regardless of how they doled out legal liability.

Making matters worse, and not merely in the legal sense, was Glenna’s absence. If he came under fire, she would be unable to speak up for him. But now as the hover cars carrying Jeklior, the two security agents, Shawna and OPR-24 touched down on reserved landing pads in front of an imposing government building, the weary reptilian knew it was time to put his mental gymnastics aside. He was here, supposedly, to give a deposition. Far better to pull his recollections into a coherent story, than to worry about unforeseen consequences.

Though the four of them entered the lobby of the building labeled “Interstellar Relations,” Jeklior was dismayed, but not surprised to see that Shawna and the gynoid were immediately dismissed. To put the best face on the situation for the girl’s sake, Jeklior flashed a broad, toothy smile and held out his right hand in the curious human custom.

“A pleasure to meet you, Shawna, Dear,” he said. “Your mother must have been very proud of you.”

Shawna frowned and looked up at OPR-24.

“Will I see him again, Oper?” she asked.

“Unknown,” said the android. “But I’m sure the Ambassador will send you greetings before he returns home.”

“But I thoughtģ.” said Shawna

“What we think and what is are often two different things,” said Jeklior. “But don’t fret. Everything will turn out for the best. You’ll see.”

Shawna smiled faintly and might have said more, had the two security agents not nudged the former Ambassador to a bank of express elevators to their right.

The blessedly fast elevator opened out in less than a minute onto a broad, high-vaulted room decorated in a style that Jeklior found pompous. He’d seen such rooms pictured in textbooks about human culture and was familiar with their intent: Intimidation, pure and simple. But as a member of an utterly different culture, human symbolism meant nothing to him. It merely made the effort of crossing to the other side more tiresome.

When they arrived at a circular table in the center of the room, seven seated human officials rose to greet him, dressed in the stiff black, high-colored suits, he’d heard about in advance. Each official, male or female, dressed the same. Curious. A female toward the center of the group spoke first.

“Welcome, Ambassador Harkani,” she said. “I am Vice Chancellor Lasso.”

“A privilege to meet all of you,” said Jeklior.

“And was it also a privilege to meet Dr. Glenna DuBois?” she asked. “Or was it more of a pleasure?”

“Rest assured, Ambassador, that we do,” said Lasso. “Which is why we have launched this probe into her suspected murder. Please be seated.”

“Just a moment,” said Jeklior. “I’m within my rights to demand legal representation.”

“You are mistaken,” said the Vice Chancellor. “This is a government-sponsored investigation, not a trial. Unless, that is, you wish to confess to the crime yourself.”