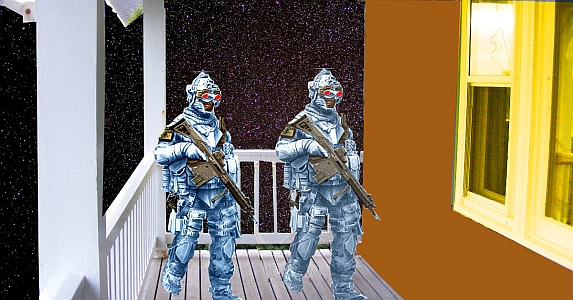 Jeklior’s heart sank as Glenna’s voice echoed out of his data reader.

“Never believe the lie that Shawna is your daughter,” she was saying. “Know that even before my team left for your world there were human extremists who opposed our joint-mission.”

As she explained, the “Earth First" movement stirred up fears that Glenna’s goal was to give the Caliax-Dronani the tools to subjugate humanity. Not only did they agitate to successfully shut down Glenna’s mission, they took steps when she returned to doom any further scientific cooperation between the two cultures.

“I have proof, my love, that during a routine health screening on my return, I was injected with a set of viruses that carried critical bits of DNA from your species. The effect was gradual but all-pervasive and … and deadly.”

Knowing that she would never be allowed to return to Caliax-Dronani, she married and, soon after, had a child. Though Shawna appeared slightly abnormal at birth, the impact of the alien genetic inheritance she received from Glenna accelerated until her mutations were plain to see.

“It was too much for Frank,” said Glenna. “He took his life, and I have to say most of his family abandoned us after that. My own family … the few that weren’t Earth First sympathizers have been as helpful as they can be, but public opinion is so much against me. And now, the viruses are getting the upper hand. I’ll be gone soon. But I don’t want you to ever regret our time together. You will always be my one and only.”

There was more on the data cylinder, including the names of the medical team responsible for infecting Glenna. It also displayed the comlink coordinates of a lab worker at the same medical facility — who had broken his silence after Frank’s death.

Jeklior leaned back in his chair, too stunned to feel the rage and grief that was mounting in his heart. Exhausted, he was tempted to let the matter drop. Until, that is, his eye caught a glimpse of the newsfeed snaking across the bottom of his quantum tablet.

Have to get her story out, he told himself.

Early the next morning, he called the lab worker on a secure line, who urged him to act fast.

“They’re not above destroying official records,” said the human. “I have backup files, but you know what the fanatics will say about that.”

“Have you come here to surrender yourself?” asked a cheeky assistant to the Council President.

Despite his objections, Jeklior brushed past the snippy youngster and went straight into the President’s office.

“Not exactly according to protocol,” said the President. “But at least you’ve saved me the bother of arresting you.”

“Arrest yourself,” said Jeklior, “for letting a foreign power set the agenda in a diplomatic crisis. Here is evidence the humans don’t want you to see. You’ll discover I have nothing to hide.”

He threw a copy of the data cylinder on the President’s desk and stormed out of the building, praying he could reach his hover car before anyone could stop him. Though he was tempted to race to the nearest spaceport and book a flight to a remote corner of settled space, he knew that would be seen as an admission of guilt.

Ruefully, he headed home, where a pair of government-issued securitybots, each equipped with a menacing particle rifle, greeted him at the door.

“We are your temporary guards,” they informed him in unison.

On the verge of tears, Jeklior entered his home and stood motionless, waiting for the other shoe to drop. Soon hunger overtook him. He changed his cloths, made himself a rich meal and tried to put his troubles in perspective. Without a doubt, the evidence against the humans was overwhelming. No question, he’d be exonerated.

But just as surely, millions of sentients on two worlds would learn of an impossible love that, too briefly, was impossibly right.